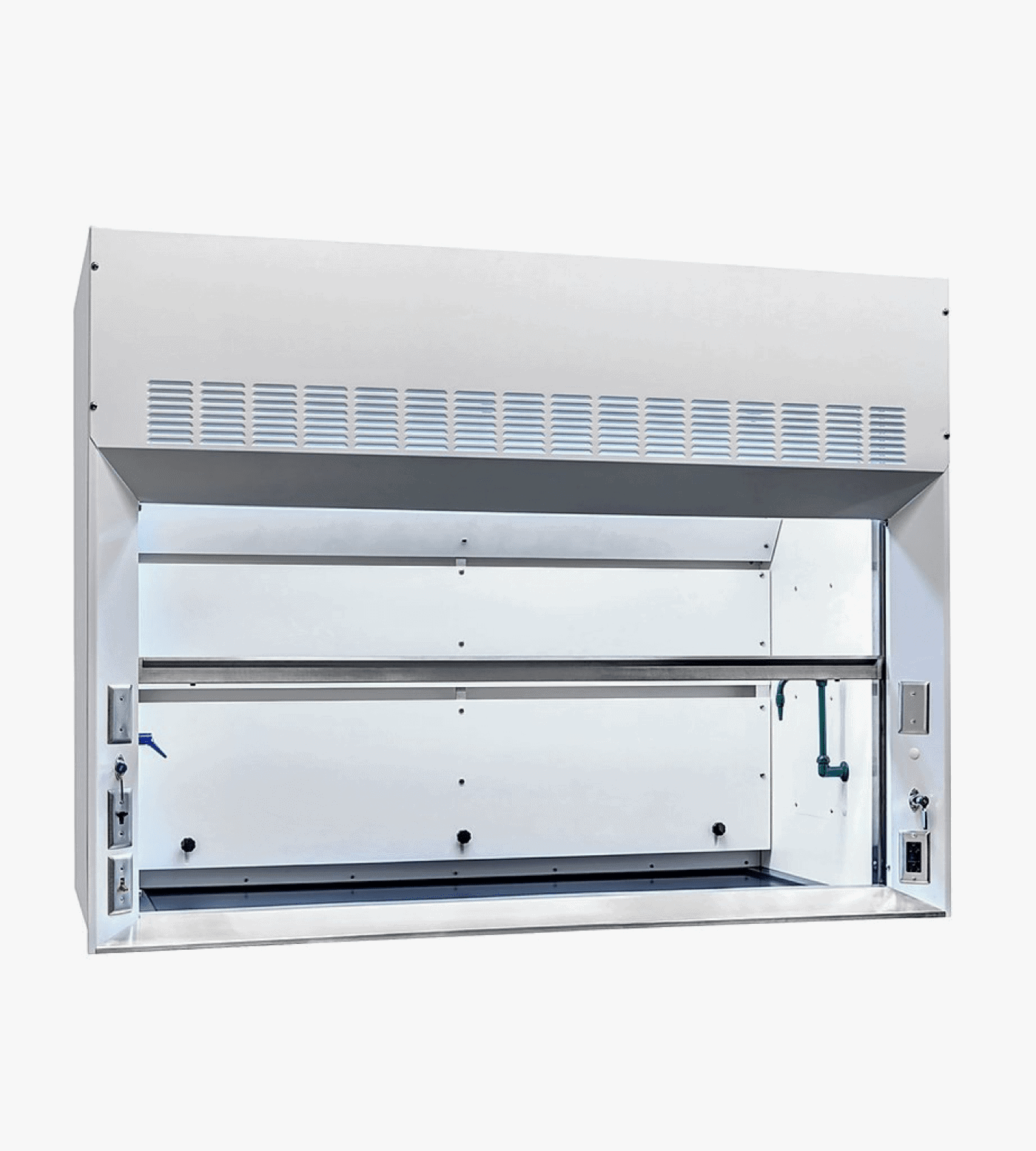 What Is a Fume Hood?

A fume hood is an exhaust system designed to remove fumes from a laboratory or work area. Fume hoods can remove chemical vapors, dust, gas, mist, or aerosols that may be harmful to workers or otherwise contaminate the lab environment.

What Are Fume Hoods Used for?

Workers in laboratory settings may conduct processes that release harmful fumes into the air. Fume hoods remove this air through a duct and out of the building, or they use a filtration system to filter the toxic particles out before releasing the air back into the lab.

How Do Fume Hoods Work?

Fume hoods work by maintaining constant negative pressure inside the fume hood body in order to ventilate harmful gases and other materials. Air vents at the back of the fume hood body, known as baffles, are used to regulate that flow and maintain a constant velocity.

These serve a general purpose and are good for tasks that don’t have special requirements.

Floor mounted fume hoods are even taller than distillation fume hoods. Instead of having a workbench, they are simply mounted directly to the floor. These are also known as floor-standing fume hoods or walk-in fume hoods—although it is not recommended that technicians walk in them.

Floor mounted fume hoods are commonly used for processes involving large equipment, drums, and distillation assemblies. They’re used in all industries but are particularly common in the cannabis industry.

Remember, never stand inside of a floor mounted or “walk-in” fume hood. These hoods are meant to hold large equipment, not people.

The benchtop exhaust hood sits on a workbench. It is the most common type of fume hood and can be designed to handle several different types of procedures.

Portable fume hoods are a form of ductless fume hood. Because they aren’t attached to a duct, they’re easy to move around the lab when necessary. Portable fume hoods use a filtration method of ventilation in which they filter out harmful fumes before redistributing the air back into the lab instead of exhausting it out of the building.

Keep in mind that you must have proper filters for the process and chemicals that you are using in a portable fume hood. If the processes and chemicals being used in the hood change, make sure to check if the chemicals present in the filters from the prior operation can be mixed safely with the new operation.

This teaching model is made of clear materials so a group of students or an audience of observers can watch what a professor or technician is doing in the fume hood while still staying safe.

These fume hoods have special liners that are resistant to acid. Their sashes may be made of polycarbonates to avoid acid etching and damage. Acid digestion fume hoods are often used for identifying the chemical composition of metallic samples by breaking them down (digesting) into component metals. They’re commonly used in metallurgical labs.

This type of fume hood protects the user from radioactivity. They often provide lead shielding, even in the sash, and coved corners to allow for thorough cleaning. Worktops are designed to hold a lot of weight, like lead shields, in addition to normal workloads. You’ll find radioisotope fume hoods being used in hospitals, clinics, and in the decommission of nuclear waste.

Instead of ventilating harmful fumes through a duct, ductless fume hoods use filtration to remove harmful gases from the air. The air never leaves the building; instead, once it is filtered, it can be safely released back into the lab environment. Because these fume hoods aren’t attached to a duct, they are easier to move and are also called portable fume hoods.

7 Parts of a Standard Fume Hood

Common parts of a general purpose fume hood include:

First, test that the fume hood is functioning correctly. Ensure that the airflow at the face is in the ideal range, clear the area around the baffles, and remove any obstructions in front of the face on the work surface.

Next, keep an eye out for airflow changes. Even without a gauge, technicians can often “feel” airflow changes that are abnormal. If you believe the airflow may not be normal, stop working, close the fume hood to the recommended level, and get help.

Once you have determined that the fume hood is functioning safely and normally, you can begin to work. Keep your face outside of the hood, and use the sash for protection when doing hazardous work.

Fume hoods are not intended to contain an explosion or other unusual events, so be sure to adhere to normal lab safety standards. Use the personal protective equipment (PPE) provided by your lab, such as goggles, gloves, face shields, and aprons.

Work at least six inches or a predetermined distance away from the hood to make sure you’re not disrupting the airflow. For ducted hoods, tape on the floor and the work surface itself should be in place to ensure there are no obstructions. If you are working with large items in a floor fume hood or a distillation hood, put them on blocks or stands to allow for airflow around and underneath them.

Remember to keep the hood closed whenever possible. This not only saves energy, but it also keeps the fume hood operating at its most efficient level. Additionally, remember to never use the fume hood as a storage unit for hazardous materials. If you need a storage unit, use a special vented chemical cabinet, not a fume hood.

The Occupational Safety and Health Administration (OSHA) requires that “fume hoods and other protective equipment are functioning properly and specific measures […] shall be taken to ensure proper and adequate performance of such equipment.” You can view their recommendations for safe usage of fume hoods here.

There are two common risks to using fume hoods in a laboratory setting:

Keep in mind that although the operator of the fume hood is at the greatest risk for injury, the entire lab may be at risk if harmful gases aren’t properly filtered or exhausted from the building.

Testing and maintenance go a long way in ensuring a safe laboratory environment. Fume hoods must be certified during an inspection that typically happens annually. These inspections use smoke tests and tracer gas contaminants to reveal any faults in the system.

Fume hood inspections are especially important since nearly a third of fume hoods usually fail these tests. It is vital to repair or replace any failing hoods immediately.

Remember to use protective gear and fume hoods properly. If you suspect issues, stop working, shut down the fume hood, and report the issue. If there is an exhaust system failure, turn off power and all service, lower the sash completely, and leave the area immediately. Don’t return until you know it is safe to do so.